CAPPFUL™ outcome measure tools have been psychometrically validated and the results published in a peer-reviewed journal. Developed by the clinical team at Arm Dynamics, these comprehensive assessments are among the first to be designed to measure upper limb prosthetic performance.

These outcome measures are comprised of multiple commonplace functional tasks (unilateral and bilateral) which are objectively scored by an upper limb prosthetic clinical therapy specialist.

The scoring mechanism for CAPPFUL assessment tools uses a 0-88 point scale, with 88 being equivalent to the performance of a sound upper limb and hand. The highest possible score of 88 points indicates that all tasks were completed as directed with no deficits in prosthesis design, fit, function, user skill or related body mechanics. Since there is no current prosthetic terminal device or sensory technology to match that of the human hand, patient scores are expected to be less than 88 points.

CAPPFUL scoring results in a nuanced evaluation of the factors impacting functional use of a prosthesis. This is achieved by scoring five key domains associated with the patient’s ability to integrate the prosthesis into their life:

Evaluation of these domains allows CAPPFUL assessments to identify which specific factors impact prosthetic integration, and can objectively inform revisions to the rehabilitation plan.

Patients are scored at milestones in their upper limb prosthetic rehabilitation, or anytime there is a change in prosthetic components or the rehabilitation plan. When scoring indicates functional deficits with the prosthesis performance, the patient’s treatment plan shifts to include one or more of these interventions:

The following data sample from a recent Arm Dynamics patient shows how CAPPFUL assessments objectively demonstrate progress in the level of proficiency in the functional use of a prosthesis. This patient is a 58-year-old male with a left transradial amputation due to a workplace crush and burn accident. He was fit with an AxonHook, an AxonRotator wrist (Ottobock), and a manual flexion wrist. He received prosthetic training from an upper limb prosthetic clinical therapy specialist. 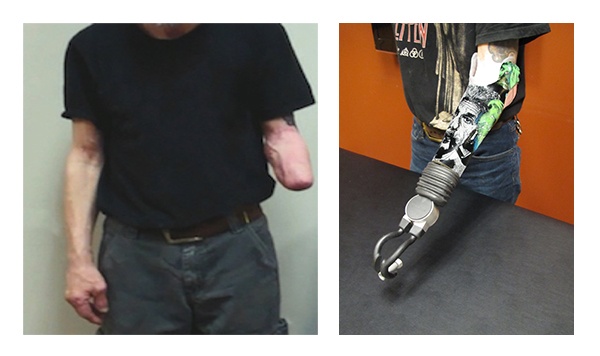 The progression of CAPPFUL scores below illustrates how use of the assessments enabled this patient to reach his optimal functional outcome. The scoring scale starts at 0 and ends at 88 points, which is equivalent to the performance of a sound upper limb and hand. This patient’s initial score was 0 because he was unable to grasp the items included in the assessment without using a prosthesis. After being fit and trained with a preparatory prosthesis, his score was 47.5, and functional issues were identified and addressed. With his definitive prosthesis, the score increased to 57. After six months of wearing the definitive prosthesis, his score increased to 73.5. His final score, which was assessed after the patient received a custom-fit socket and frame replacement, was 79.5 out of 88 possible points. 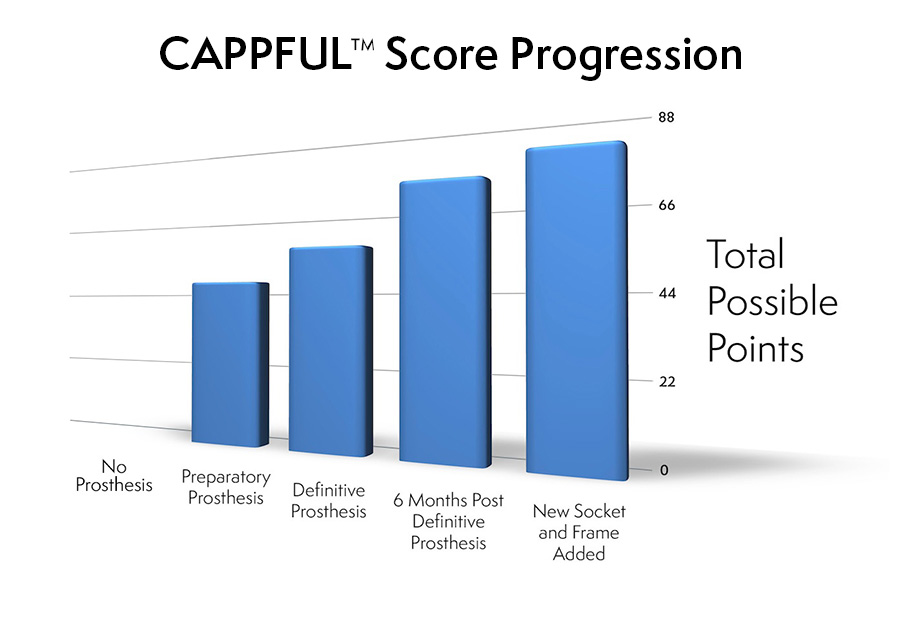 Without using CAPPFUL outcome measures, the patient’s improvement in the functional use of his prosthesis may have stalled at 47-57 points, as represented by the scores he received using the preparatory and definitive prostheses. However, the patient completed two subsequent CAPPFUL assessments that identified lingering functional challenges, and the treatment plan was modified to resolve these issues by adjusting the prosthesis and increasing targeted training. As a direct result of these interventions, the patient was able to achieve 90.34% of the performance of a sound limb!

The Arm Dynamics clinical team has been collecting evidence-based data as a standard of care for more than ten years through a combination of performance-based and patient-perspective assessments. While this has provided objective, scientific evidence of the positive functional benefits of upper limb prosthetic rehabilitation, the industry standard outcome measures prior to CAPPFUL are limited because they:

Introducing new, validated outcome measures that are specific to this patient population was essential to support evidence-based practices in patient care and insurance reimbursement justification.

CAPPFUL assessments were designed to evaluate the performance of any functional upper limb prosthesis and ensure that these uniquely challenged patients have the opportunity to reach their maximum rehabilitation potential. The Arm Dynamics team is eager to provide specialized resources that support the work of prosthetists, physicians, nurse case managers, occupational and physical therapists, and insurance reimbursement specialists and their patients. 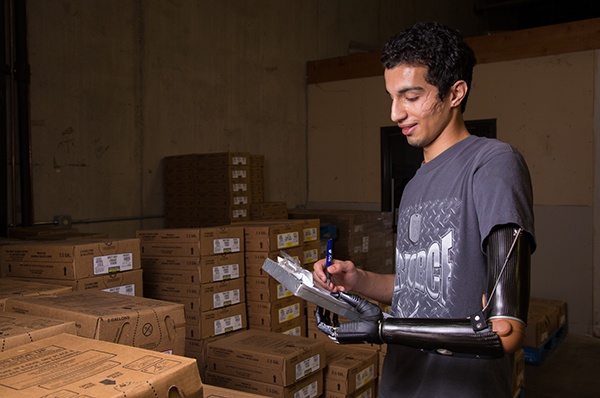