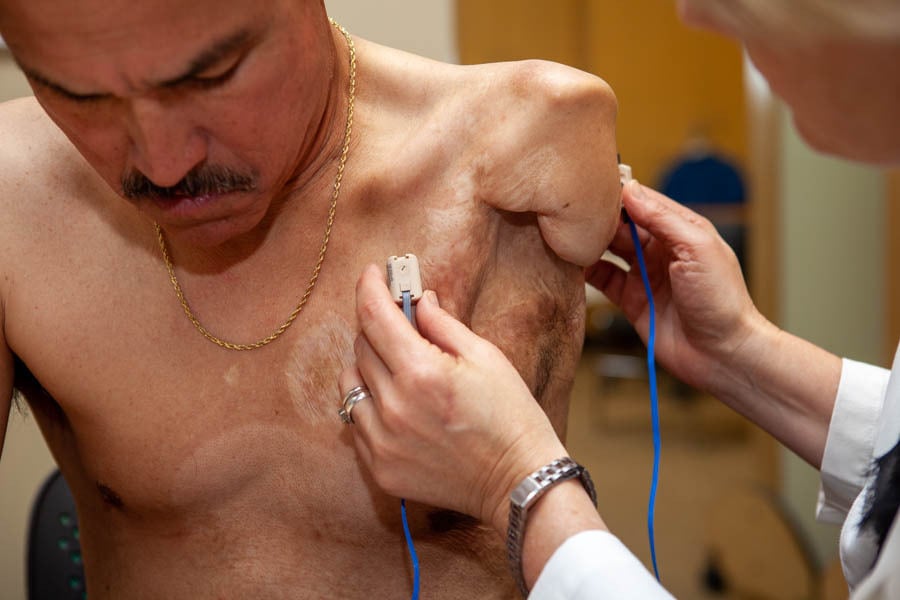 When a limb is amputated, the nerves which controlled the muscles of the now missing part of the limb are still there, partially – but they no longer have muscles to control. As explained in our neuroma article, a nerve with nothing “to do” can ball up into a neuroma and cause localized pain as well as trigger phantom pain. There is now a surgical procedure available to upper limb amputees that can help alleviate the pain issues caused by a neuroma, as well as provide the ability to better control a myoelectric prosthesis.

That surgery is Targeted Muscle Reinnervation, often referred to as TMR. TMR is a surgical procedure wherein the surgeon “reassigns” nerves that once controlled hand or arm muscles on the residual limb or chest. A portion of an intact “targeted” muscle is denervated by cutting the nerve that usually controls the muscle. It is then reinnervated by connecting one of the nerves severed in the amputation so that the nerve will now control the targeted muscle. Giving a severed nerve a new “job” helps prevent neuroma growth and normalizes the nerve signals that are sent to the brain, thereby reducing pain signals. More and more surgeons are routinely doing TMR procedures at time of trauma, which prevents the need for a secondary surgery.

While many of our patients who have had TMR surgery say that they would undergo the procedure solely for the pain relief, it can also be very helpful to improve control of a myoelectric device, especially for individuals with high-level amputations, such as above the elbow or at the shoulder level. Myoelectric prosthetic devices are usually controlled through two small electrical signals generated by the contraction of two muscles in the residual limb.

Two electrodes are placed over muscles on opposite sides of the residual limb. With those two electrodes, amputees can get the hand to open and close – but TMR has the potential to provide up to six muscle sites to be used to control prosthetic components, such as an electric wrist rotator or an electric elbow with more intuitive thought.

There are great benefits in terms of pain control and prosthetic control that can be gained from having TMR surgery. However, there are also important factors to consider such as how long the rehabilitation takes after the surgery and whether or not an insurance company will pay for a myoelectric device. Those details will be covered in subsequent articles, but for now, if you would like to learn more about TMR surgery and how you can become a candidate for it, please contact us. If you have any experience with TMR surgery and would like to share your thoughts with us and your peers, please leave a comment below.