Going to School with an Upper Limb Difference 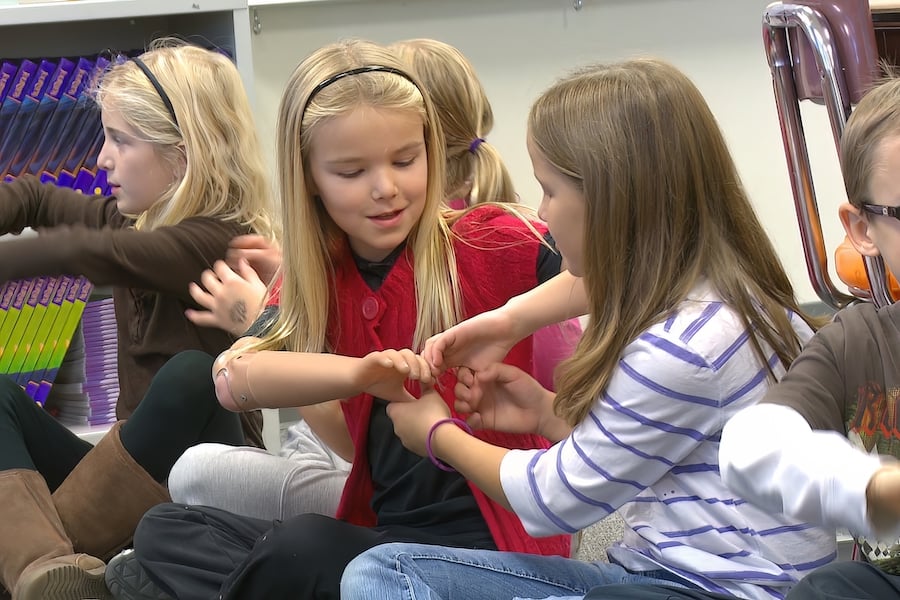 Going to school for the first time with a prosthesis can be a challenge for a child, the teacher and the other students. It is difficult to know how each is going to react. The child with the prosthesis may be apprehensive about the attention the prosthesis will garner. Their classmates may have a mix of feelings and behaviors associated with seeing a prosthesis or residual limb for the first time. Their teacher may be uncertain about how to approach the situation while being sensitive to everyone's feelings. Whether the child is starting preschool or kindergarten or returning to school with a prosthesis, it's a good idea to openly discuss the prosthesis.

My daughter Amber was born without her lower right arm and started wearing a prosthesis at six months. When Amber was ready to start kindergarten, I came up with a plan to help prepare her teacher and her classmates for that first day. Amber and I met with the teacher before school started to show and explain about Amber’s congenital limb difference and the prosthesis that she wore. Then I wrote a letter to the parents of Amber’s classmates explaining the same thing. Amber’s teacher made copies of that letter and included it in the welcome packet at the school’s open house. The letter encouraged the parents to prepare their children ahead of time by talking about Amber’s limb difference. In addition, the letter let the parents know that our family is very open about Amber’s limb difference and prosthesis and we welcomed any questions.

On the first day of school, I went into the kindergarten room with Amber. I told the children that Amber was born without her right hand and showed them her prosthesis. Then I explained that I was going to take the prosthesis off to show them her short arm. The prosthesis was passed around to each child. They had the opportunity to touch the electrodes inside the socket to open and close the hand. This helped them understand how Amber moved the hand. Since there’s a lot of hand-holding in kindergarten, I knew it would be important for the children to touch and feel the prosthetic hand because it’s not warm and soft like a real hand. What I wanted to avoid was having a classmate refuse to hold hands with Amber because they might be afraid of the device.

While almost all the kids were excited and curious about Amber’s prosthesis, there was one child on that first day who said something negative. I remember, he said “That’s freaky.” I was glad that he was honest in his reaction because it provided the opportunity to address those feelings. I told him that it might seem freaky to him, but it is actually just different. I pointed out how all the students in the room are different, like differences in height, hair color, and clothing choices. I emphasized how wonderful it is that we are different: “Isn’t it great that we are all different? If we weren’t, how would you be able to tell which person in this classroom was your teacher?”

Meeting with the children that day and addressing Amber’s difference head-on seemed to help her classmates accept Amber. Amber and our family have learned that children are honest in their reactions, but they are also very accepting once something is explained to them. Because of that, we followed the same routine at the start of every school year until Amber was in fifth grade and felt confident enough to take over the explanations herself.

This routine could work just as easily for a child who has recently started wearing a prosthesis and could take place at any time during the school year, with the support of the teacher. The above process could also help if a child switches to a different type of prosthesis. Additionally, whenever Amber started a new sport, we would do the same routine, showing her teammates her activity-specific prosthesis. We would have Amber doff and don her device so that the children would be comfortable seeing her with the prosthesis on and with it off.

Amber was shy when she was little, so it wasn’t always easy for her to talk about her difference with children or adults. But as she grew older, she became an advocate for herself. You can watch Amber use her devices in her patient profile video:

Would a prosthesis benefit your child, either in school or in the rest of their daily lives? Many of our patients are lifelong prosthesis wearers whose consistent use of their devices as children set them up to be successful prosthesis users as adults. One example is Amber, who is now attending college in another state! The correct use of a prosthesis can keep your child from experiencing overuse issues, both now and as an adult. If you would like to have a consultation with our clinical team to learn more about your child’s options, please contact us. Do you have an experience with attending school with a limb difference, either when you were a child or as a parent supporting a child? We’d love for you to comment below.