Why Do Some People Choose Not to Wear a Prosthesis?

Most people who are fit with an upper limb prosthesis want to use it to be more active and independent. But how much they actually wear their prosthesis varies widely from one person to the next.

There are also people who choose to stop wearing a prosthesis entirely. A 2007 research paper, “Upper Limb Prosthesis Use and Abandonment: A Survey of the Last 25 Years” (scroll to "Overall rejection rates" headline in linked article), found that about one out of five individuals who were fitted with an upper limb prosthesis ultimately decided not to wear it.

Here are some of the reasons why:

People with amputations above the elbow or below the wrist (scroll to "Amputation Levels" headline in linked article), are more likely to struggle with functional use of a prosthesis. 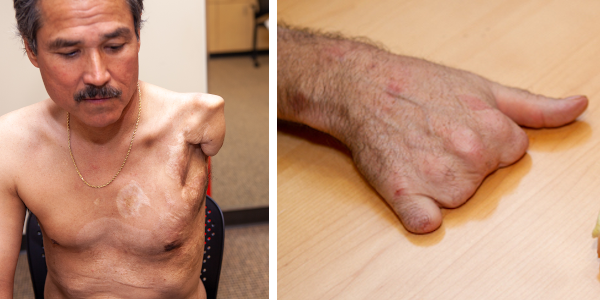 Prosthetic arms for above-elbow, shoulder level and forequarter amputees are heavier and can be more awkward to control than a below-elbow prosthesis.

Partial hand and finger amputations have unique and varied presentations that can make it more difficult to restore functional use of the hand with a prosthesis. Also, until the past few years, there were not as many prosthetic components available for this level compared to below-elbow and above-elbow devices.

It’s encouraging to note that several highly functional prosthetic components and innovative socket designs have been introduced for people with partial hand and finger loss.

Adapting to life with one hand

Some people who are born with a limb difference learn at an early age how to do most things with one hand. Likewise, some amputees who’ve lost a portion of an upper limb are faced with lengthy delays in being fit with a prosthesis due to additional surgical procedures, healing time for the residual limb, or gaining insurance authorization. They might be so used to doing things with only one hand that they don’t think about how a well-designed prosthesis could make their life easier. In some cases, people who have tried a prosthesis in the past and didn’t like it are simply unaware of advances in modern prosthetic technology that might give them a more positive experience.

Pain and discomfort and sweat

If the socket doesn’t fit well, it’s going to cause pain, soreness and frustration. Not many people are willing or able to continue wearing a prosthesis that hurts every time they put it on.

Arm Dynamics understands that a well-fit socket is essential, and has developed proprietary designs that dramatically improve comfort, range of motion and control of the prosthesis. These include the MicroFrame interface for shoulder disarticulation and forequarter amputees; a patented partial hand socket; the Transradial Anatomically Contoured (TRAC) interface; and custom silicone sockets for every amputation level.

The silicone socket below combines a cushioning inner layer (green) that touches the skin and a durable outer layer (blue) that provides structure and support.

Amputees who do not receive prosthetic training from a clinical therapy specialist become frustrated with their inability to use and control the prosthesis effectively. Without the support and expertise of a therapist who's experienced in upper limb prosthetic rehabilitation, patients are more likely to give up on using their device.

Being fit with the wrong prosthesis

People with upper limb loss or difference who are treated by a general prosthetic provider may be fit with a prosthesis that is not appropriate for their functional goals. This can result in dissatisfaction with the performance of the prosthesis that leads them to stop wearing it. Upper limb prosthetic specialists educate amputees about all of the prosthetic options that are available and help them determine which device will allow them to achieve their individual goals.

Lack of insurance and other financial issues

Much like other kinds of medical care, the cost of prosthetic rehabilitation is a barrier for people who don’t have insurance or those who have insurance that won’t pay for what they need. The Arm Dynamics Justification, Authorization and Billing Team works closely with patients on self-advocacy and negotiating with insurers to increase the likelihood of being approved for prosthetic rehabilitation.

If you’ve stopped wearing a prosthesis and are satisfied with your decision, please share your story in the comments below. Other people who are living with one hand could benefit from your experience!

If you’re reconsidering the possibility of trying a new prosthesis, you might enjoy watching this short video about our patient, Candice Dicke, who was born with an upper limb difference and chose not to wear a prosthesis for many years.